The IFRMP aims to provide an answer to the basic question:

Given all that we know, which watershed restoration actions will provide the broadest possible benefits to functional watershed processes and native focal fish species, both within each sub-basin and throughout the Basin?

To answer this question, ESSA Technologies Ltd. has drawn on decades of prior and ongoing research and planning efforts in the basin and worked with a diverse group of committed participants from across the basin to develop and apply a multi-criteria scoring method. The IFRMP prioritization method is embedded in the Klamath IFRMP Restoration Prioritization Tool that provides a systematic, repeatable and transparent prioritization framework to identify those restoration actions that yield the greatest benefits to multiple focal fish species. Priorities that emerge from the Tool provide a consistent starting point for more detailed and contextualized discussions about selecting and sequencing Klamath Basin restoration actions.

The primary outputs of the IFRMP planning process are available from the links below:

Additional supporting resources associated with the plan document is available on the Resources page, and many of the references cited within the plan are available through our Document Library. The sections below provide more information on the IFRMP planning context, process, and outcomes that will help readers better understand the intent behind the development, interpretation, and future use of this Plan.

The Klamath Basin of south-central Oregon and northern California is one of the largest rivers on the Pacific Coast and was also historically one if its most significant producers of salmon and other native fish. However, a wide range of historical and ongoing human activities across the Klamath Basin, including construction of four lower Klamath River hydroelectric dams across the river’s mainstem as well as numerous smaller dams along its tributaries, have contributed to reduced flows, habitat loss, and increases in nitrogen and sediment inputs in waters that are already naturally phosphorus-rich. Adding to these pressures are more frequent and extended droughts and forest fires associated with accelerating global climate change.
Many of these stressors have significantly impaired underlying watershed functional processes, eroded water quality, and contributed to dramatic declines in the populations of many native fish. Loss of fish species have been deeply felt by many who live, work, and fish across the basin and have led to decades of conflict and debate over how to restore fisheries of great cultural, health and economic importance while also sustaining other natural goods and services. Numerous local, Tribal, state, and federal organizations have responded by spearheading a diverse range of restoration efforts, most recently including an effort to remove four lower Klamath River hydroelectric dams. 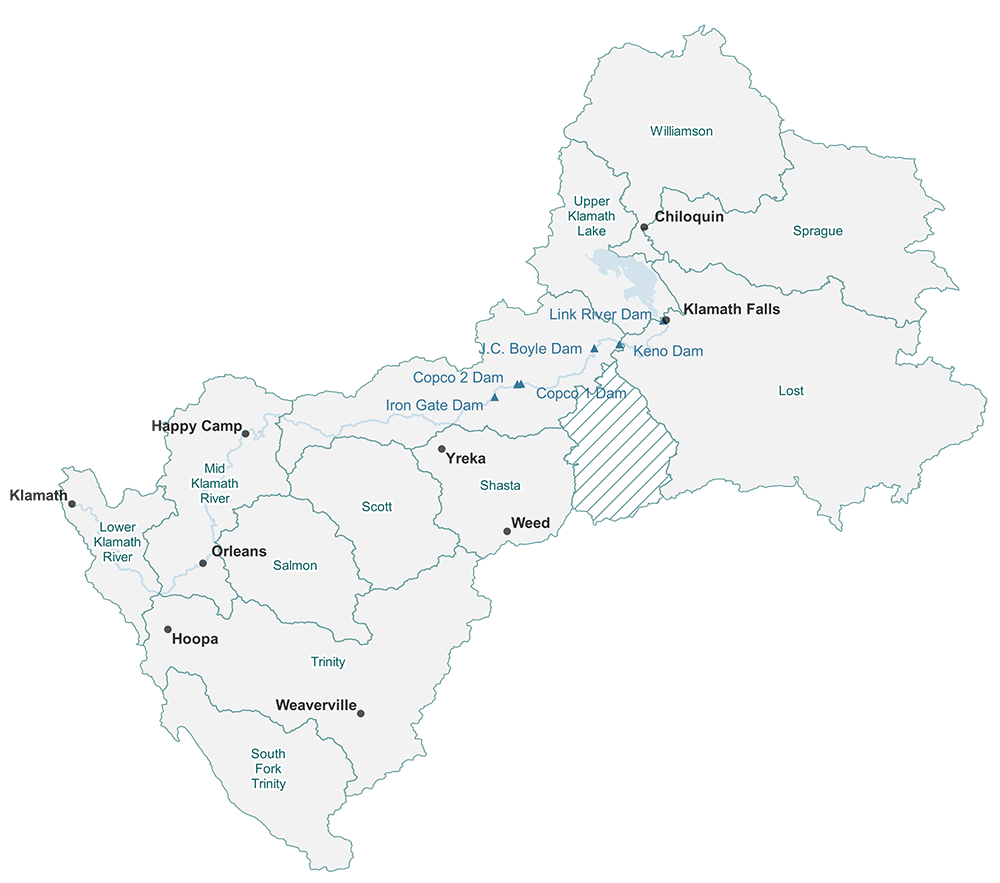 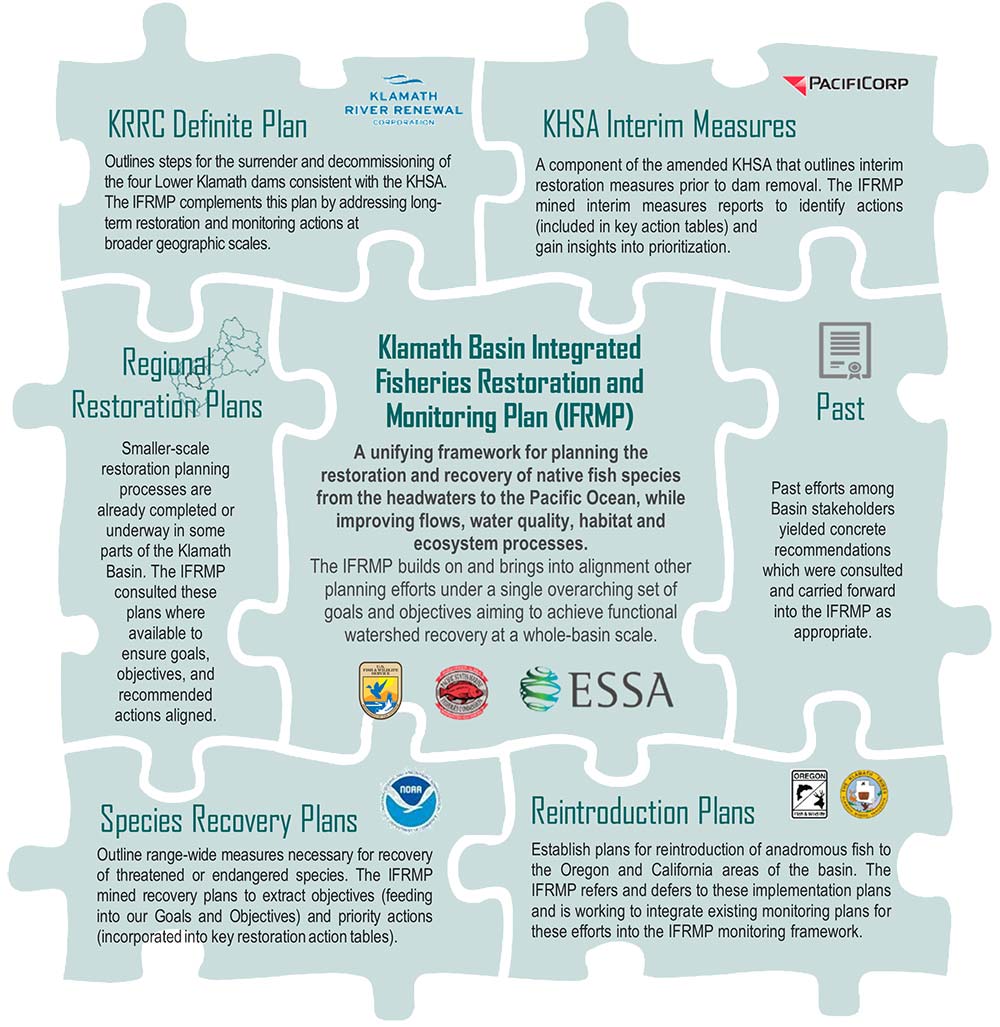 In 2016, the U.S. Fish and Wildlife Service (USFWS) engaged the Pacific States Marine Fisheries Commission (PSMFC) and ESSA Technologies Ltd. to develop this Draft Integrated Fisheries Restoration and Monitoring Plan (IFRMP or Plan) to help coordinate restoration efforts across the Klamath Basin to support the recovery of native fish. This planning process was structured around a process-based approach to watershed restoration that aims to identify and address multiple root causes of watershed degradation by prioritizing the restoration of landscape-scale ecological processes and functions to benefit the entire aquatic ecosystem, rather than the traditional focus on addressing the resulting symptoms for individual sites and species.

To guide this process, the planning team developed and applied a multi-criteria scoring method for systematic, repeatable, and transparent prioritization of Klamath Basin restoration actions to yield the greatest benefits to multiple focal fish populations. By helping to identify priority restoration actions for broad-scale benefits, the IFRMP will provide a unifying framework for guiding the allocation of funds for restoration and monitoring in ways that help to complement and extend the restoration efforts being directed by other restoration plans and initiatives in the basin that are more narrowly focused on specific species, habitats, stressors, or sub-regions. In this way, the IFRMP strategically bridges across other planning efforts together to find synergies and address key gaps.
This planning process owes a debt of gratitude to more than one hundred scientists, restoration practitioners, and other participants from across the Klamath Basin who contributed many hundreds of person hours between 2016 and 2022 to the development and review of this Plan by sharing their data, references, and professional judgement through correspondence, interviews, workshops, surveys, and numerous peer-review cycles of the plan document itself. More information about participants and their work across many phases of the planning process can be found in the IFRMP Plan Document.

Each of the IFRMP objectives (described in the IFRMP Plan document) are linked to associated core performance indicators (CPIs) that will be monitored across the Klamath Basin to track and communicate progress towards basin-wide recovery. Through a series of expert webinars convened June-August 2021, subject-area experts discussed in detail the current monitoring infrastructure in place across the Klamath Basin. These subject-area experts evaluated the strength of existing monitoring for providing broad evaluations of the status of CPIs within the different biophysical tiers, identified important monitoring gaps, and made recommendations as to where/how the IFRMP could best supplement this existing monitoring to improve basin-scale assessments of CPI status and trends.

There were also commonalities in the recommendations across CPIs in terms of the spatial allocation of sampling effort. In many cases the proposed stratification variables were the same, providing the opportunity to co-locate sites thus minimizing effort and providing additional information for individual CPIs. Monitoring recommendations fell into one of the following categories: 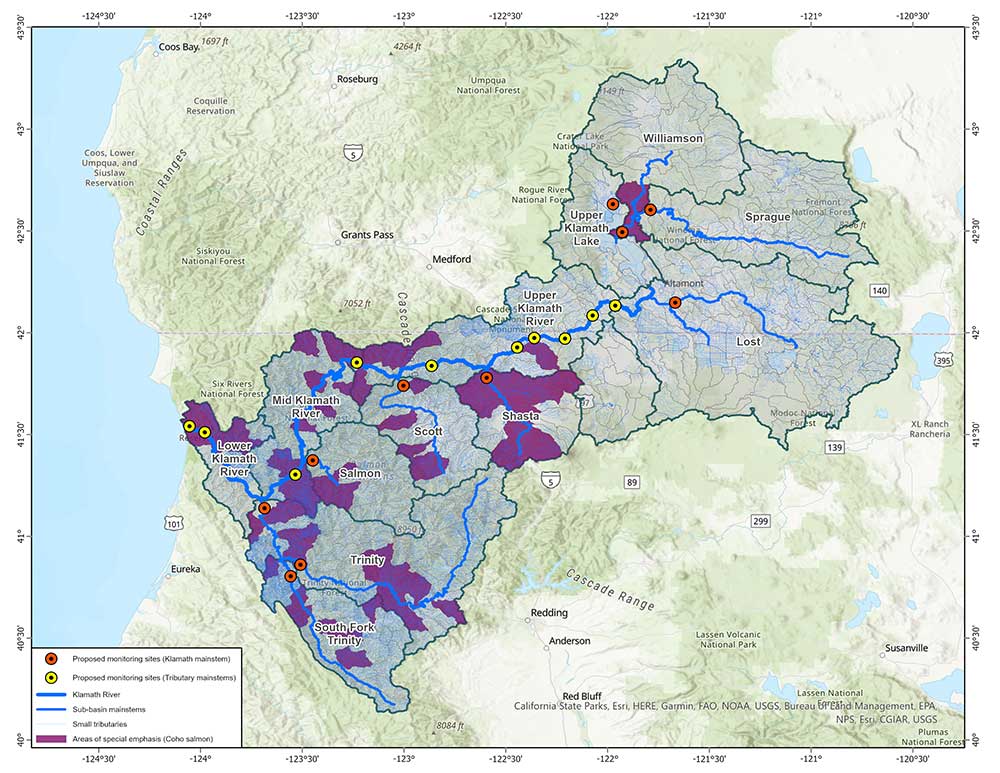 The restoration priorities emerging from the IFRMP and described in the Plan document provide a helpful, evidence-based starting point for further discussions to select restoration projects most suitable for near-term implementation. However, these are not intended to be viewed as definitive, static recommendations. Instead, the ‘point-in-time’ lists of priority project concepts in this plan are meant to:

These priorities are not meant to be fixed. Rather, this repeatable prioritization process is meant to be repeated in future years as currently proposed projects are completed, new project opportunities emerge, and conditions in the basin continue to change.

The implementation of any of these priority restoration activities requires the cooperation and support of private landowners, states, Tribes, local governments, and other organizations that call the Klamath Basin home. This support, in addition to project cost, funding, permitting, and other aspects of current local context, will need to be considered in addition to prioritization when making restoration funding decisions.